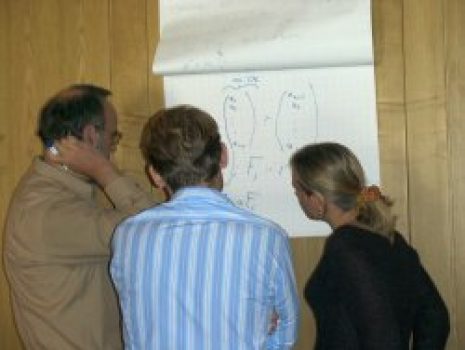 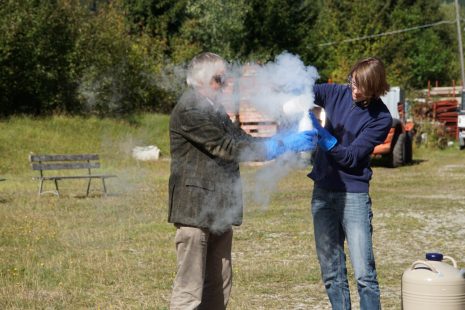 About the philosophy of the Summer School

The Summer School has been around since 1984. Inspired by the established, tried-and-tested summer schools of the Studienstiftung (the German Academic Scholarship Foundation), it was the Technical University of Munich, initially, that decided to offer something similar for its own top students. It was soon joined by Friedrich-Alexander University Erlangen-Nürnberg, and in 2002, the University of Stuttgart completed the trio of organisers that we have today. Incidentally, the addition of Stuttgart marked the realisation of a proposal put forward by an academic who had taught on the Summer School, when appointed to a new post at Stuttgart University in 2001 – it is not unusual to make such requests during job negotiations.

The German academic landscape has changed beyond all recognition since 1984 – take, for example, the overriding emphasis nowadays on competition, the excellence initiatives, internationalisation and the Bologna process. The Summer School has stood remarkably firm through all of this, staying true to its original aims and remaining conservative in the way it delivers them (including vis-à-vis the slow progress in the introduction of fast broadband to the Sarntal valley) – although the term “conservative” can be interpreted in different ways. It is interesting to note that the summer schools of the Studienstiftung and our own Summer School have each managed to preserve their own niche – despite the sudden explosion in summer, winter and other schools. But nearly all of these invite gurus to speak and expect the students or (more often) PhD candidates to sit and listen; there are very few that unreservedly embrace the adventure of “letting them set the agenda, not us”.

The two unshakeable principles of the Summer School – (1) “That’s the way we do it because that’s the way we’ve always done it” and (2) “That’s out of the question as we‘ve never done it that way” – find expression in various rules that we still adhere to today, even though – especially given the changes in day-to-day university life that we mentioned earlier – they are regularly challenged:

The first two points, especially, frequently meet with incomprehension or even outright opposition on the part of those looking for new courses, including course leaders. You might say “Yes, I’m happy to do that. I’ll do three days, and my colleague Dr. Müller can take care of the rest”, but the colleague’s response, more often than not, is “I’m sorry but how is that supposed to work – me disappearing off to a summer school for 12 days? It’s completely out of the question. I just can’t fit it in to my schedule.“ Inevitably you then start to wonder whether you really are such an under-employed, part-time professor with a schedule so empty that you can afford to regularly hang out in the mountains for 12 days. So here are a few words of explanation. Why do we continue to take this approach, and why are we so stubborn – some might even say obstinate – in insisting on doing things this way? After all, the organisers of the Summer School are well aware, of course, that, given the mountain of academic commitments we all have to juggle day-in, day-out, freeing up time for the Summer School is no mean feat. And yet it is a really worthwhile thing to do.

Firstly: Where else in today’s world do university teachers (and yes, that is exactly what we all are above all else) still get to enjoy direct, close contact with the students, uninterrupted by the demands of a hectic schedule? And with the top-calibre students at that – not the ones always coming up with excuses and wanting to be let off this or that exercise. And conversely, where else, nowadays, can these genuinely interested students still get direct access to the “academic heavyweights” who are normally rushing from one meeting or appointment to the next? You don’t necessarily need to browse biographies and memoirs from the “golden age of physics in Germany“ to see just how this kind of interaction can bear fruit. (And yes, the fact that there was a lot of hiking in the Alps involved then as well also lends weight to our argument!)

Secondly: Where, nowadays, can people really take all the time they need to discuss ideas, to persevere with a concept that might at first seem abstruse, to really get to grips with something, immerse themselves and get somewhere with it as part of a group? It stands to reason that, right across all subjects, the most successful and fruitful Summer School courses are the ones in which all participants wholeheartedly embrace the adventure, generating a creative dynamism within the group which brings the course alive.

Thirdly, it’s a chance for the professors, too, to put their heads together – indeed the list of ideas for postgraduate programmes, special research topics, research networks or individual projects born in the Sarntal is a sizeable one. In theory, all these discussions could, of course, take place at the university at which you are based – but in practice, there is often not time to squeeze them in between all your other daily commitments.

Fourthly, the setting and the multi-disciplinary approach are a further source of enrichment – for tutors and students alike.

So yes, we could organise the Summer School differently; yes, colleague A from Stuttgart could pitch up in the Sarntal from Monday to Thursday, colleague B from Erlangen from Friday to Monday, and then colleague C from Munich from Tuesday to Friday, in the manner of a relay race. Or the professor could say a quick “hello“ and his or her assistants could take care of the rest. That might indeed be possible, but it would change the whole flavour of the Summer School, and would turn a unique event – one that holds great appeal both for students and for its backers among the professors at the host universities – into just another standard-format offering. And that skewed thinking that goes “The briefer my appearance, the more important I am“  is something we really have no use for in Sarntal.

Of course it is possible to make the odd exception to the compulsory attendance rule – basically for prior engagements entered into out of necessity and definitely not for pleasure! By contrast, events attended for the sake of enhancing your own reputation, such as an invitation to speak at a conference, do not count as grounds for an exception.

The Summer School does not rank alongside those commitments that seem to conspire to steal our time. Those with a true understanding of the Summer School see it as one of the now very rare opportunities to create or preserve space in our lives for the things that really matter. The fact that the Summer School is one of the best, if not the best means of checking out and winning over the next generation of academics is a further vital argument for leaving things just the way they are, the way that has proved itself over what is now more than three decades.

Please contact our team if you have any further questions.

We use cookies to ensure that we give you the best experience on our website. If you continue to use this site we will assume that you are happy with it.Ok